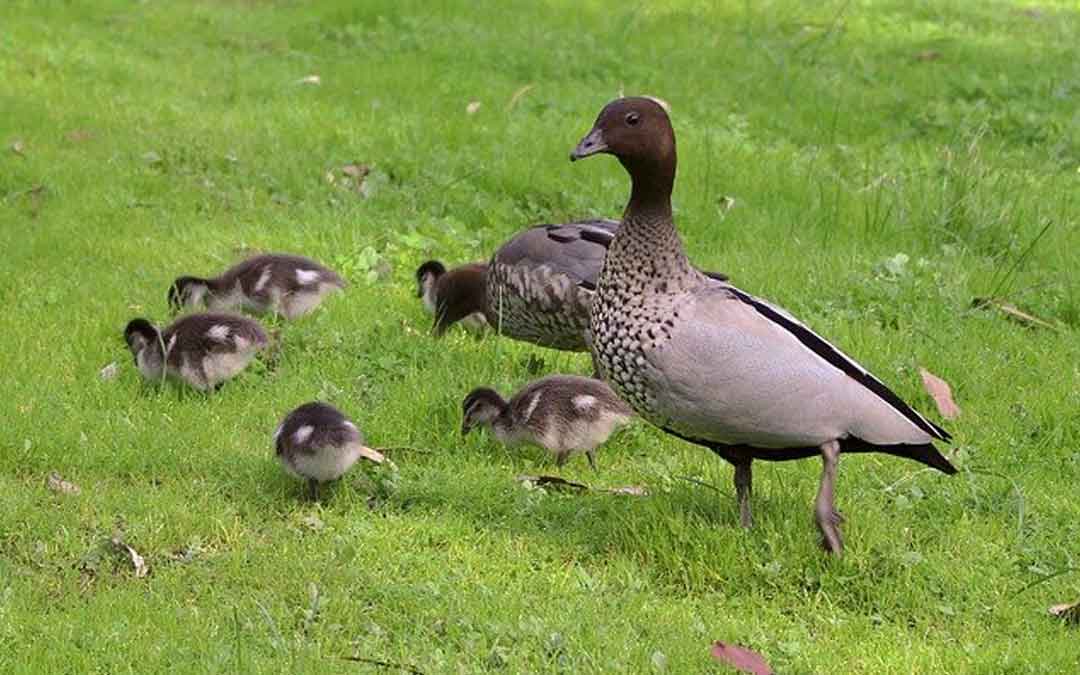 Have you got close to a pair of ducks lately and been hissed or flapped at? It’s a sure sign that Spring is here and nesting season, and the first of the ducklings are now appearing.

I was recently riding along the main Yarra Trail at Banyule Flats and saw a pair of Australian Wood Ducks (Chenonetta jubata) entering a hollow of an old River Red Gum (or perhaps it’s a Studley Park Gum…).

Australian Wood Ducks occur throughout a lot of Australia, including in Tasmania. It often surprises people that they nest in trees (they’ve even been known to nest in chimneys). They are yet another species that use the hollows that form in old trees as nesting sites. They choose nesting locations near or above water and often return to the same nesting location each year. Despite sometimes retreating to water when disturbed, they spend most of their time feeding on land, in the shallows perched on logs or up in trees. You rarely see them out in open water as they prefer to be on or very near land.

Ducks and their eggs have long been an important food source for Indigenous Australians. Unlike many species, Australian Wood Ducks have thrived since colonisation. They have adapted very well to living near dams, in irrigated paddocks on farmland, urban parks, golf courses and even around backyard swimming pools.

Australian Wood Ducks are faithful mates because they create pairs that stay together year-round. The male plays an equal role in feeding and raising the duckling once they hatch. They usually have 8 to 10 ducklings in a ‘clutch’ per year, but very often this is reduced to just a handful as predators such as foxes take them as easy prey.

For the first month or so once they leave the nest (by jumping down!) ducklings follow their parents around. Unfortunately, they often need to cross roads. If you do see this happening, please be patient and allow them to cross.
It’s almost impossible to tell the sex of ducklings, but when they become bigger you can tell the difference as the males have darker heads and bellies and the females have white stripes near their eyes.

Australian Wood Ducks forage for food and mainly eat grasses and small annual herbs, including introduced species such as clover. They sometimes also will eat insects. They forage for food by ‘dabbling’, which is the word that describes the way they plunge their beak under the water and their tail feathers stick out as they forage on aquatic weeds and insects.

Why you should avoid feeding ducks bread

In the wild, ducks (and all waterfowl) NEVER eat bread and it’s really bad for them. Ducks love bread but it offers no or very little nutrition for them. It’s like feeding a human only donuts. They get fat but are essentially starving because they are malnourished. Feeding a duck bread can make them ill and discourages them from using their foraging skills and teaching those skills to their offspring. Feeding ducks can make them expect humans to provide food and get aggressive if they don’t get it. In spots where lots of people feed ducks often, the leftover bread can pollute the water and increase the risk of botulism.

If you must feed them, take only a small handful of thawed frozen peas, chopped up lettuce or rolled oats instead of bread.

But really, if you love ducks, just go and watch them forage for their own food, they’ll generally let you get close and are a joy to watch.