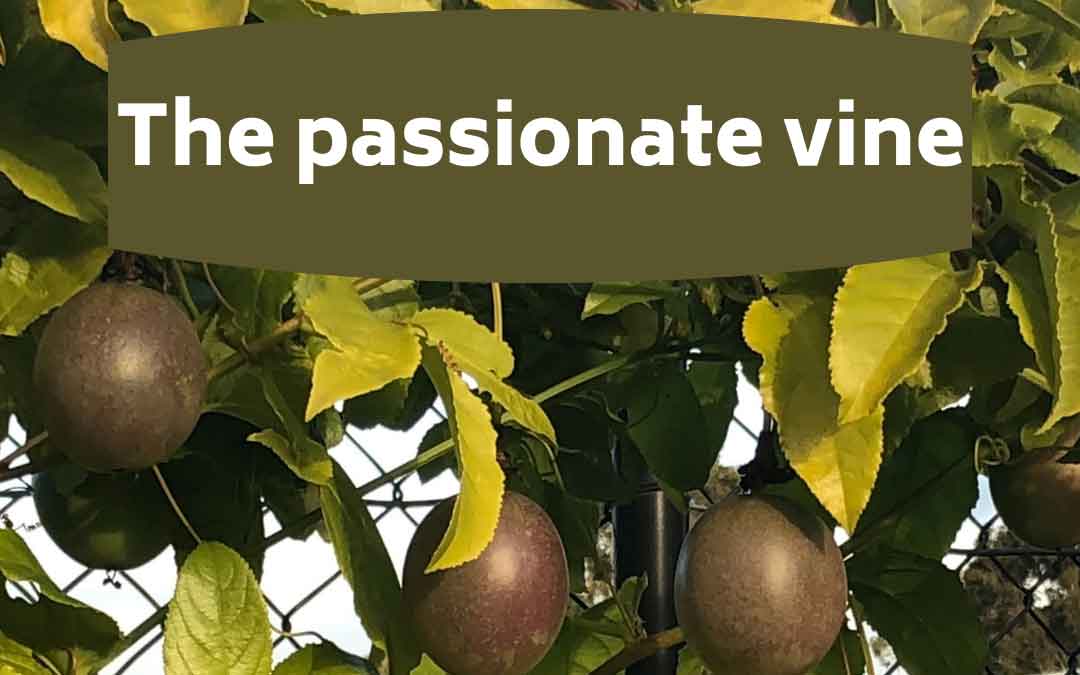 Passionfruit vines are South American in origin and in Australia were originally a tropical plant, grown mostly in Queensland and Northern NSW. Their popularity led to the development of a southern variety known as Nellie Kelly which is ideal for cooler climates like ours. Choose a non-grafted variety. These are much more controllable and do not sucker like grafted varieties.

Passionfruit vines can be finicky to establish and grow but follow the tips here and you will find they are well worth the effort.

Passionfruit is self-fertile so one is enough for most gardens as they can spread 6 – 8 metres both horizontally and vertically. They require a strong trellising structure which should be built before planting. If planting in a pot the pot needs to be at least 1/2 metre in diameter, also with a strong support structure.

Passionfruit prefer a warm, sunny, sheltered position, well fertilised soil and regular water. They thrive on nitrogen and iron. In earlier times, offal was placed in the hole before planting to supply these nutrients during the first year. There is no reason these days not to do this but usually blood and bone or pelletised chicken manure is placed in the hole instead.

Spring is the best time to plant a new vine as the warmer soil allows it to establish well before winter. It needs regular deep watering while establishing. The first crop of fruit will appear between 5 – 18 months depending on conditions and time of planting. In the first year tendrils will creep across the wires or trellis, firmly attaching the vine to its support. To encourage lateral growth, pick out the small buds.

Pollination is exclusively by bees in the natural world so it is important to plant bee-attracting plants such as lavender, borage, nasturtium and catmint as an understory or nearby. If there is a lack of fruit, hand pollination can be carried out with an artist’s paint brush. Research has shown that bagging the flowers produces less fruit than flowers pollinated by bees. The flowers themselves only last a few days when not pollinated and drop. They can also fall off due to a lack of regular watering. The fruit ripens on the vine, taking 3 – 4 months, and when ready drops.

Maintenance of passionfruit vines is essential. In spring, prune back by about a third. Then fertilise with blood and bone right along the extensive root system and well out from it, not just around the stem. Don’t overdo it though as too much will cause the flowers to drop. A dose of iron chelate several times a year, especially if the vine is yellowing, is necessary too. Potash in spring will strengthen the flowers and as a result produce more fruit. Every 6 – 8 weeks spray the foliage with a seaweed extract according to instructions on the bottle. Lightly prune the foliage after fruiting but leave the branches and laterals which are the vine’s framework.

Pests of passionfruit include slugs and snails, sap-sucking insects such as passion vine hopper, scale and mealy bug, and fruit fly. Slugs and snails eat holes in the foliage. Check with a torch at night and pick them off or use a bait. Sap-sucking insects suck sap from leaves and stems resulting in flower drop, stunting and leaf yellowing. They all produce honeydew, which attracts ants, and promotes sooty mould. Ants are a sure sign of sap sucking insects. Using a horticultural oil* is effective but needs to be repeated as it will not kill the eggs. Sooty mould responds well to a good hosing. Queensland Fruit Fly is becoming a serious pest in the northern suburbs of Melbourne having arrived from the Yarra Valley. Examine dropped fruit, and fruit on the vine, looking for pinpricks and woody lumps on the skin. Netting (including netting of individual fruit) and Queensland Fruit Fly pheromone (e.g. Wild May) lures are the best ways of dealing with Queensland Fruit Fly, and the immediate disposal of infected fruit is vital. Either burn, or drown infected fruit in a lidded bucket, and definitely do not compost them.

Diseases are few. Fungal diseases including brown spot and septoria (also a problem on tomato plants) and passionfruit woodiness virus are the main culprits. Fungal diseases respond well to pruning as it results in better air circulation, and to spraying with a copper based fungicide such as Bordeaux mix. Passionfruit woodiness virus which produces woody fruit and yellow, crinkly leaves is really a stress disease. If the plant is young, fertilise and water regularly and deeply, and it may revive. With older plants, remove and replace with a new vine.

And finally, watering, my favourite topic! A healthy passionfruit vine needs watering twice weekly, deeply. Watering needs to be comprehensive as the root system will be extensive. Water along the length of the trellis and widely on both sides. People often water only around the main stem and this is a serious mistake. A well-watered vine will be healthy, will avoid flower drop and will produce an excellent crop of delicious passionfruit.

*Home made oil consists of 1 cup vegetable oil to 1/2 cup detergent. Dilute in the ratio of one part oil to 9 parts water and spray well on both the top and underside of leaves.