Ribbit ribbit, what frog is that? 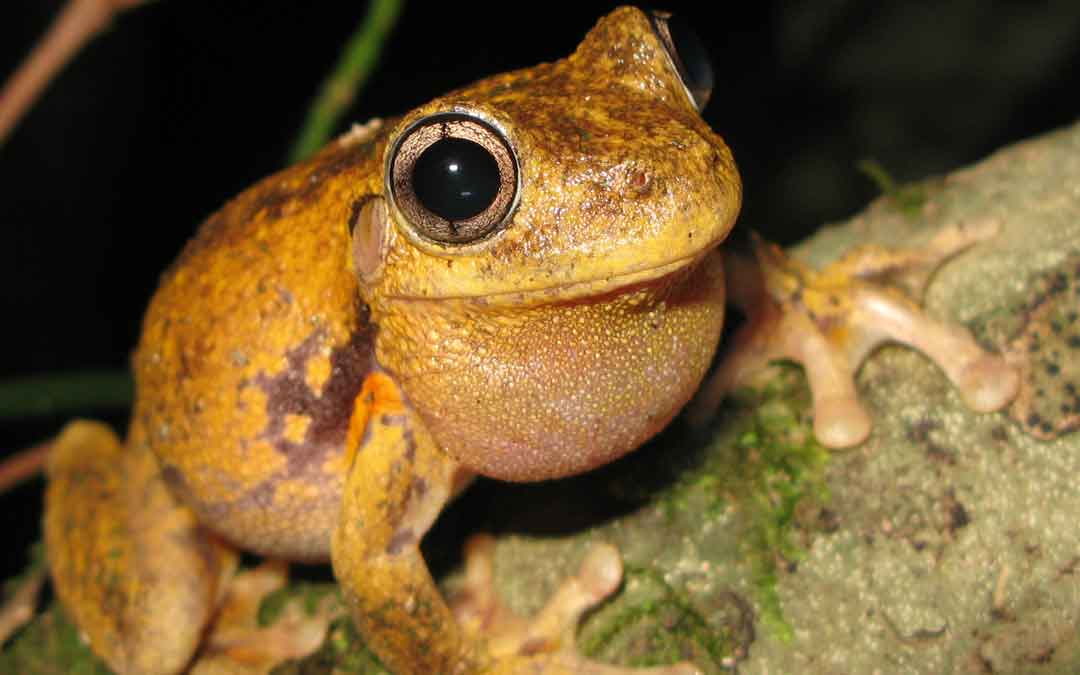 As spring approaches, more and more frogs can be heard calling. Because they’re so good at camouflaging themselves, you’re much more likely to hear a frog than see one.

There are plenty of frogs local to Macleod. Once you know the sounds you’re listening for, it’s not hard to identify the species.

Types of frogs in Victoria

In Victoria we have two main types of frogs, tree frogs and ground frogs. Tree frogs are good climbers and often hang out in vegetation. Ground frogs can burrow and this helps them survive hot and dry weather. So if you’ve ever dug up a frog in your garden, it’s likely to have been a ground frog.

The other night I heard, and then was lucky enough to see, a Peron’s Tree Frog, Litoria peronii. They are quite common around north-east Melbourne and (in my opinion) quite cute. Ranging in colour from brown to very pale grey they can change colour within an hour or so to help them camouflage. They have distinctive black cross-shaped pupils in their silver eyes. The one I saw was about 4cm long but they can grow a little bigger than this.

Peron’s Tree Frogs are sometimes known as the laughing tree frog, or the maniacal cackle frog, because of their call.

The frog I spotted was a long way from the river, but that’s not uncommon with these species. The one I saw was calling near a man-made water feature. They start calling around this time of year, so keep an ear out for it’s distinctive call that sounds like a cackle and goes: Grah-a-a-a-ah-ah-ah-ah-aah-aah-aah-aaaah-aaaah

Listen to the Peron’s Tree Frog

Only male frogs call. They are usually trying to attract a mate. Peron’s Tree Frogs don’t like living in the water but the males frequently call near where females will want to lay their eggs. All frogs need water or wet vegetation to lay their eggs in, so during drought years they can be few and far between. The relatively wet couple of years we’ve had recently will likely lead to increased frog numbers this year.

Peron’s Tree Frogs are not uncommon but they are always a welcome sight as they are what we call an indicator species. Frogs breathe and drink through their permeable skin, so they are very sensitive to changes in the environment. Seeing tadpoles or hearing frogs usually means the waterways or environment you are hearing them in is relatively unpolluted.

Frogs are carnivorous. They eat insects, mosquito larvae and other invertebrates that they can catch with their tongue and fit in their mouth. They also form the diet of many other native species, especially birds. Because frogs are both predator and prey they form an important role in the food chain. If there are too many predators, frogs disappear and if there is not enough for them to eat they’ll also disappear.

Across the globe, frogs are under increasing threat from habitat loss, cats and other introduced predators, climate change, toxic chemicals, stormwater pollution and the chytrid fungus.

If you’d like to contribute to the data and help protect our frogs, find out which frogs are active in our area, or become familiar with the calls of our local frogs, I encourage you to become a citizen scientist. You don’t need any wildlife skills.

FrogID is a national citizen science project run by the Australian Museum. You can download their free app and listen to, identify and then record the species you hear.

Melbourne Water also runs a community frog monitoring program known as the Frog Census. They also have a free app that allows you to listen to, identify and then record the species you hear.

Both projects have maps you can search to see frogs other people have recorded nearby.

Both also provide advice about how you can provide frog habitat at your place.

So next time you hear a frog croak, whistle, bark or chirp, pull out your phone, identify the species and record it. Ribbit ribbit.