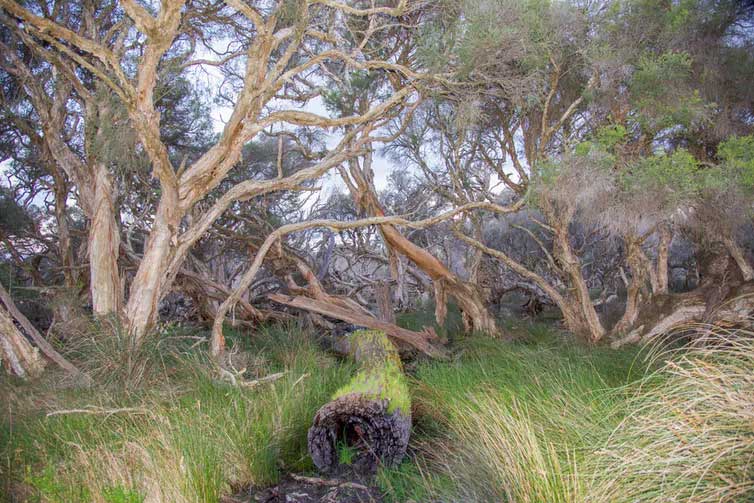 Trees are the Earth’s lungs – it’s well understood they drawdown and lock up vast amounts of carbon dioxide from the atmosphere. But emerging research is showing trees can also emit methane, and it’s currently unknown just how much.

This could be a major problem, given methane is a greenhouse gas about 45 times more potent than carbon dioxide at warming our planet.

However, in a world-first discovery published in Nature Communications, we found unique methane-eating communities of bacteria living within the bark of a common Australian tree species: paperbark (Melaleuca quinquenervia). These microbial communities were abundant, thriving, and mitigated about one third of the substantial methane emissions from paperbark that would have otherwise ended up in the atmosphere.

Because research on tree methane (“treethane”) is still in its relative infancy, there are many questions that need to be resolved. Our discovery helps fill these critical gaps, and will change the way we view the role of trees within the global methane cycle.

Yes, you read that right! Methane gas within cottonwood trees was first reported in 1907, but has been largely overlooked for almost a century.

Only in 2018 was a tree methane review published and then a research blueprint put forward, labelling this as “a new frontier of the global carbon cycle”. It has since been gaining rapid momentum, with studies now spanning the forests of Japan, UK, Germany, Panama, Finland, China, Australia, US, Canada, France and Borneo just to name a few.

Research on tree methane is still in its relative infancy. In some cases, treethane emissions are significant. For example, the tropical Amazon basin is the world largest natural source of methane. Trees account for around 50% of its methane emissions.

Likewise, research from 2020 found low-lying subtropical Melaleuca forests in Australia emit methane at similar rates to trees in the Amazon.

Dead trees can emit methane, too. At the site of a catastrophic climate-related mangrove forest dieback in the Gulf of Carpentaria, dead mangrove trees were discovered to emit eight times more methane than living ones. This poses new questions for how climate change may induce positive feedbacks, triggering potent greenhouse gas release from dead and dying trees.

Treethane emissions most likely account for some of the large uncertainties within the most recent global methane budget, which tries to determine where all the methane in the atmosphere comes from. But we’re still a long way from refining an answer to this question. Currently, trees are not yet included as a distinct emissions category.

So where exactly is the treethane coming from?

Within wetland forests, scientists assumed most treethane emissions originate from the underlying soils. The methane is transported upwards via the tree roots and stems, then through to the atmosphere via their bark.

We confirmed, in other recent research, that wetland soils were indeed the source of methane emissions in lowland forest trees. But this wasn’t always the case.

Some lowland forest trees such as cottonwood can emit flammable methane directly from their stems, which is likely produced by microbes living within the moist trees themselves. Dry upland forest trees are also emerging as methane emitters too — albeit at much lower rates.

For our latest research, we used microbiological extraction techniques to sample the diverse microbial communities that live within trees.

We discovered the bark of paperbark trees provide a unique home for methane-oxidizing bacteria — bacteria that “consumes” methane and turns it into carbon dioxide, a far less potent greenhouse gas.

Remarkably, these bacteria made up to 25% of total microbial communities living in the bark, and were consuming around 36% of the tree’s methane. It appears these microbes make an easy living in the dark, moist and methane-rich environments.

This discovery will revolutionise the way in which we view methane emitting trees and the novel microbes living within them.

Only through understanding why, how, which, when and where trees emit the most methane, may we more effectively plant forests that effectively draw down carbon dioxide while avoiding unwanted methane emissions.

Our discovery that bark-dwelling microbes can mitigate substantial treethane emissions complicates this equation, but provides some reassurance that microbiomes have evolved within trees to consume methane as well.

We must be clear: trees are in no way shape or form bad for our climate and provide a swath of other priceless ecosystem benefits. And the amount of methane emitted from trees is generally dwarfed by the amount of carbon dioxide they will take in over their lifetime.

However, there are currently 3.04 trillion trees on Earth. With both upland and lowland forests capable of emitting methane, mere trace amounts of methane on a global scale may amount to a substantial methane source.

As we now have a global movement aiming to reforest large swaths of the Earth with 1 trillion trees, knowledge surrounding methane emitting trees is critical.

Read more:
Half of global methane emissions come from aquatic ecosystems – much of this is human-made

This article is republished from The Conversation under a Creative Commons license. Read the original article.