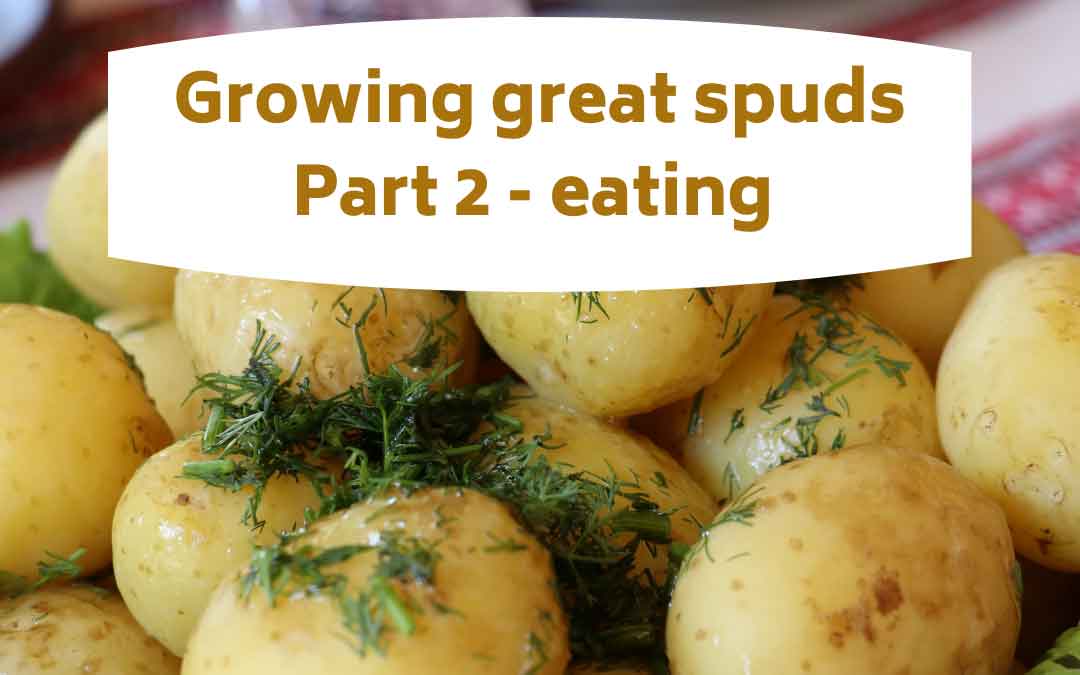 Wonderful things about potatoes include their varied skin and flesh colours, textures, tastes and variety of culinary options. No longer is a potato ‘just a potato’. They are now known by name and carefully selected for their characteristics and uses. They are even made into desserts.

Skin colour varies from cream to brown and red to purple, and flesh from white, cream and yellow to pink and purple.

Textures vary from floury to waxy to a combination of both called ‘all rounders’. It should be said that my extensive research failed to distinguish neatly between the categories with different food and garden writers attributing some potatoes to different categories, e.g Desiree, Kenebec, Blue Congo and Maris Piper were sometimes said to be floury and sometimes all rounders. There is no dispute about waxy potatoes.

Floury have a starchy, fluffy dry texture and are used for baking, chips and mashed potato. They include King Edward, Coliban, Burgundy Blush, Purple Congo and Pentland Dell.

Waxy are great in potato salad or any dish where you want the potato to hold its shape. They include Nicola, Kifler, Dutch Cream, Pink Eye, Pink Fir Apple, Brownell, Russian Banana and Salad Rose.

All rounders are used as the name suggests for everything – boiling, mashing, baking, chipping, and roasting. They include Desiree, Kennebec, Red Pontiac, Royal Blue, Sebago, Up to Date, and Spunta.

Nutritionally, much of the goodness is in the potato skin so it is best wherever possible to keep the skin on or use it in another way. A medium size potato has no fat, 6 grams of protein, 61 grams of carbohydrate, 4 grams of fibre and 5 grams of sugar. It also contains fibre, potassium, Vitamin C, antioxidants and no cholesterol.

Much of the negativity about potatoes being fattening comes from added cheese, butter, sour cream or fat or oil that it is cooked in. The best oil to use is extra virgin olive oil. It is a myth that you should not cook or heat with extra virgin olive oil which has a very high smoke point. Olive oil labelled ‘light’ or ‘pure’ should be avoided as it is very low quality.

It is recommended when cooking potatoes in water to use the minimum of water. If unsalted water is used, water indoor plants with it once cooled.