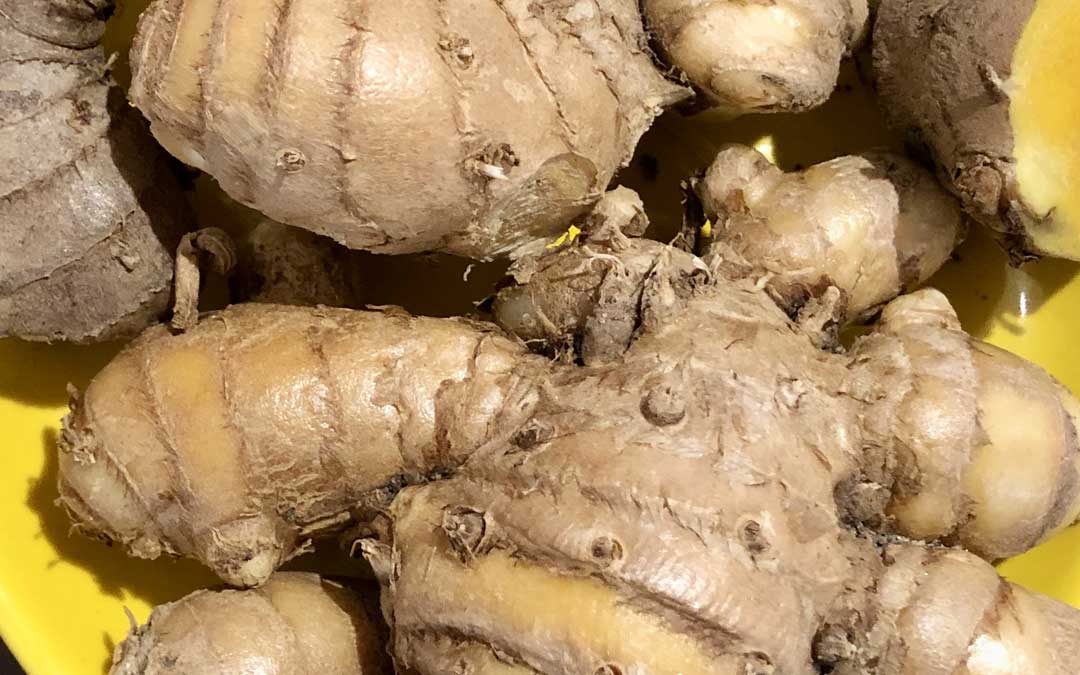 This article is based on my own experience. Over 40 years ago my first shot at growing ginger was when I was owner of the first Tasmanian herb nursery. Planting ginger was an experiment with little expectation of success. I cut the ginger rhizome into pieces each with a knob that would become a shoot and planted them in a polytunnel greenhouse, in a heat bed in early spring. The heat bed consisted of buried, fresh horse manure beneath a layer of soil into which the rhizomes were planted. After several months, plants appeared, then flowers. When they eventually died off, there was a crop of ginger remaining.

Last year I planted the galangal that was donated to the Macleod Organic Community Garden. I planted it in a wicking bed in a polytunnel and this produced a significant crop.

Also last year, I planted turmeric in the open air against the north facing wall of my mud brick potting shed. The mud brick acted as a heat bank. Last month (August) I noticed that the leaves had died down. I dug up the plant and was rewarded with a good quantity of plump turmeric.

These three experiments have led me to believe that we can grow edible tuberous rhizomes in Melbourne despite the conventional wisdom being that these tropical plants require warm, humid conditions to succeed. The warm conditions can be obtained in various ways but my plants have had very little humidity though, in general, plenty of water. Frost, of course, is no friend of these plants. Notably, the galangal left outside in pots at the community garden suffered badly but all have recovered now that they have been returned to the polytunnel with fresh, green shoots emerging.

My conclusion based on my own experience is that harvesting when the leaves die down, probably in August, then replanting in September, will produce a decent though not necessarily huge crop per plant. So buy some, preferably organic, rhizomes as these won’t have been sprayed with shoot inhibitor. Cut them up, plant them out, and let us know what happens.