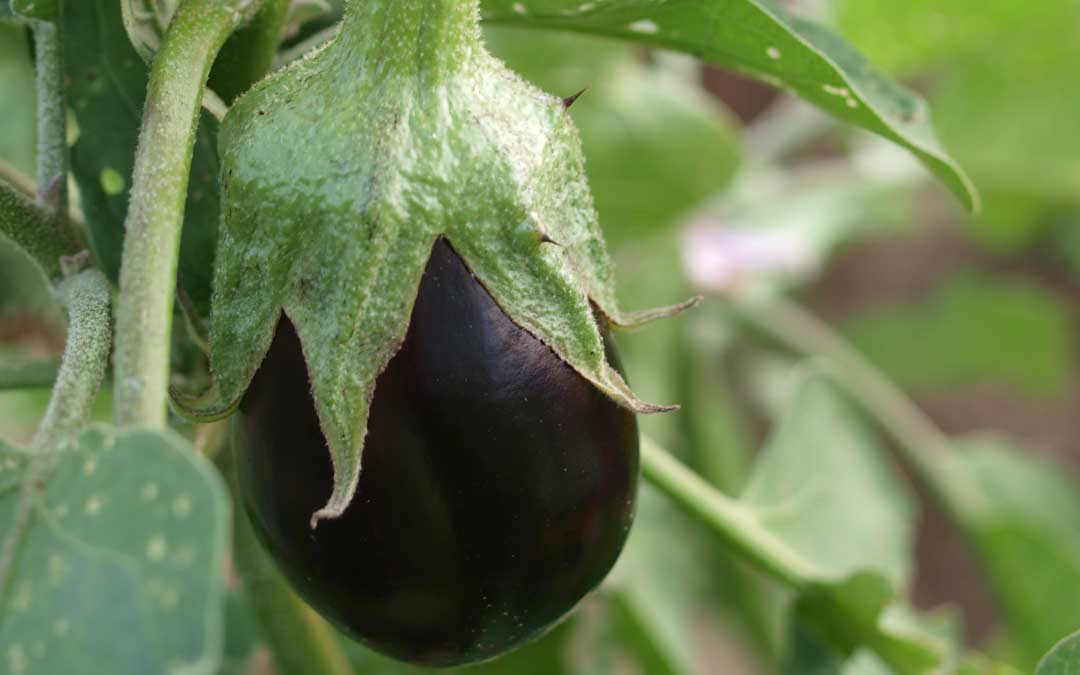 Full sun in the hottest part of the garden.

Read our article to find out what full sun actually means when it comes to planting vegies.

Dig over soil with a fork, loosening it and breaking up clods to a spade’s depth. Dig in compost and well rotted manure (or pelletised manure) several weeks before planting. The site should be well drained and soil not heavy or clayey. Keep well weeded. The sandier the soil the better but in Banyule we don’t have sandy soil so lighten it as suggested.

Eggplants and capsicums like long, hot summers. Plant in October so that there is enough time for plants to mature and fruit. It is best to buy seedlings from your nursery unless you have a heat mat on which to raise seeds. Seeds need soil temperature of at least 21C to germinate. Plant out in October and protect if there is a late frost. Plant 1/2 metre apart.

Eggplants and capsicums (and chillies) can grow well in pots. Use a good quality potting mix and add plenty of compost and well rotted animal manure or pellitized manure. Plant one eggplant or capsicum per pot that is at least 40cm in diameter. Stake the plant and keep the soil moist at all times.

Water directly onto soil or mulch; if mulched, make sure the soil beneath it is moist. Keep mulch away from stems to prevent collar rot. Water with a soft stream from the hose or watering can or use dripline. Remember to water the roots and not the leaves. This prevents powdery mildew as does morning watering. (Evening watering can leave too much moisture if leaves have been splashed and consequently lead to a powdery mildew outbreak.) Water seedlings at the time of planting and then every second day for the first couple of weeks, followed by deep watering twice a week. (Lack of water results in bitter fruit.) Reduce the water for eggplants a couple of weeks before harvest; to produce better quality fruit.

Eggplants can benefit from a side dressing of pellitized manure. Capsicums need high levels of calcium and magnesium, and a lack of these reduces the yield. Seaweed liquid fertiliser is a useful addition every couple of weeks for the health of the plant.

How to avoid blossom end rot

Blossom end rot is a condition that, as the name implies, causes rotting on the underside of the fruit. Technically, it is a result of the plant getting an inadequate supply of calcium but this is usually caused by the plant not getting sufficient water to its flowers and fruit. Strengthen the water delivery system by applying additional potash (available in packets from your nursery) around each plant at the time of flowering, and make sure you are giving the plant adequate water.

How to avoid sunburn

When there is an extreme heat event, eggplants and capsicums can burn and blister. This manifests as white, soft blisters on the skin. Rig up a quick shade house by banging four star pickets into the corners of the bed, drape with shade cloth or old sheets and secure with yellow star picket caps. Alternatively, just drape an old sheet over the plants. Water deeply BEFORE the heat event. A well hydrated plant will not burn or wilt.

How to avoid poo trails inside your eggplants and capsicums

In eggplants, the eggfruit caterpillar bores into the fruit and tunnels through leaving a black trail of crusty poo through the flesh which, although it can be cut out, often ruins the eggplant, especially if you want to use it whole or halved. Capsicums likewise may have a hole or two and black deposits will be evident within the fruit. Dipel, which is an organic bacterium, can be used to protect fruit from caterpillars.

Aphids, mites and whitefly can be a problem, Avoid using pyrethrum, which is broad spectrum and kills both good and bad bugs. A sharp spraying with the hose is often effective as is spraying with soapy water. Some plants deter aphids and white fly. These include nasturtium and basil. Slugs and snails should be removed by hand. Marigolds act as a decoy plant for slugs and snails, meaning they will be attacked before your vegetables.

Do not grow in the same place, or where other members of the Solanacaea family such as tomatoes or potatoes have been grown, for three years.