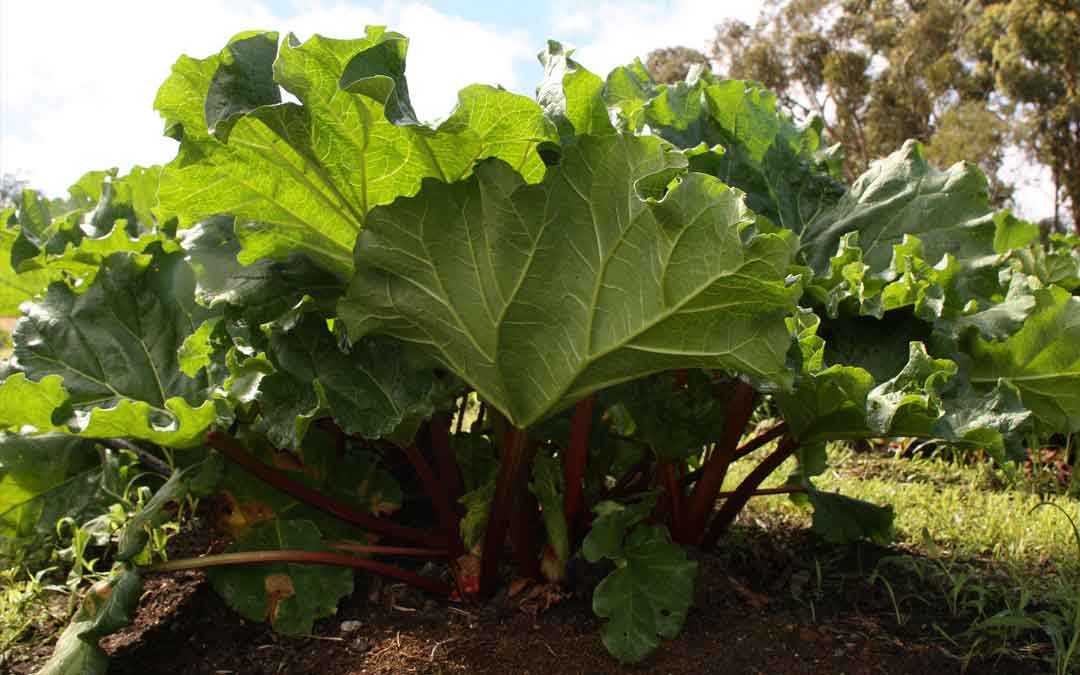 Some fruit and vegetables are grown from crowns and these require careful planting. A crown is defined as a part of a plant where stem and roots meet. Examples are rhubarb, strawberries, asparagus and horseradish.

For rhubarb and strawberries, it is important that the eye or bud of the crown is planted at, or just above, soil level as this prevents crown rot. Each is best grown in a dedicated bed in sunny, moist, well-drained conditions and both do well with a generous mix of well-rotted manure and compost annually. Rhubarb comes in green and ruby colours and wide and narrow stems. At the Macleod Organic Community Garden a heritage variety is grown that has been in the Preston area for over 100 years. This is a narrow reddish/green variety. Also at the community garden we grow Tioga strawberries (pronounced ‘choga’) which are a large, juicy strawberry with foliage that is more upright than many varieties, which keeps the berries off the ground and therefore clean.

Rhubarb should be divided after a number of years when it is clear that its production is waning. Use a sharp spade to cut through the crown making sure that each piece has an eye and re-plant.

Unlike rhubarb and strawberries, asparagus needs to be planted deep in trenches and backfilled as the shoots emerge. They need to be well drained so in our clay soils it is important to add plenty of organic matter. Trenches should be at least 75cm deep and 40cm wide. Rows should be 60cm apart. Once dug, add organic matter in the form of well composted manures to the base. Form a mound roughly 6cm high and wide along the length of the trench and spread the roots of 2 year old crowns evenly over the mound (crowns can be purchased in winter from nurseries). Then backfill so the crowns are covered and once the shoots emerge, cover again so the tip is beneath ground. Do this each time the shoot emerges until the trench is filled with soil. The first spears should not be cut until the following season and then only 2-3 per plant. The season after that as many spears as you like can be harvested. Harvest them with a knife, preferably a curved one, just beneath the soil.

At the end of the season asparagus will shoot up into tall ferny fronds. Leave these until they are yellow (some months away) and then cut them to ground level, weed the bed and compost it.

Asparagus can also be grown from seed but it will take years longer to get a decent harvest. Male asparagus spears are the ones generally eaten while female asparagus produce red berries which can be planted.

Horseradish, on the other hand, needs little attention. It is grown from root cuttings – either small pieces of root that can be buried or crowns. Plant the crowns so that the shoots are just above ground, and leave for a couple of years before harvesting. For long straight roots, knock off all but a pair of leaves on each plant. Remember – horseradish is quite invasive. Planting it in the ground in a large plastic tub with the bottom cut out is a good way of allowing the roots space to develop but at the same time contains it from sideway spread.